As much as we were getting used to the bluebird days of 50 degree weather, our cozy chalet, our stars and stripes race suits, our ugly ceremonies sweaters, and the long treks to the dining hall, the Olympics had to come to an end at some point. I'm still having a hard time believing we were there for three weeks because it seemed to fly by even though there was so much happening. We flew out of Sochi the night of Closing Ceremonies and arrived in Munich early the next morning. We all went to bed for a few hours and then had a day to get our feet under us and do some serious organizing that consisted of unpacking, repacking, and then doing it all over again about three times. With the exception of Erik who did almost every race at the Olympics, the rest of us only raced 2-4 times, but racing aside, the Olympics left us all pretty exhausted. We're bouncing back more and more each day and will be ready to go this weekend, but we had some tired puppies after the last three weeks! Here are some photos from the second half of the Olympics!


We are currently in Lahti, Finland where we'll be jumping right back into the World Cup circuit starting with a skate sprint tomorrow and a skate distance race on Sunday. Lahti is having a really bad snow year, so we're skiing on manmade snow that resembles big sugar crystals. It's going to be a leg burner pushing through the deep sugar, but the courses are fun and we're looking forward to some more races! After Lahti this weekend, we'll be heading to Oslo, Norway for the Drammen city sprints and Holmenkollen distance races.
Posted by Sophie Caldwell at 8:33 AM 1 comment:

One of the awesome things about the Olympics is that it draws a lot more US attention to cross country skiing than we usually get. Friends, family, and everyone who religiously watches NBC during these three weeks likely gets at least a glimpse of our sport and hopefully even think it's a little cool! I've mentioned this before, but one of the things that I think is the most impressive about our team, is their ability to celebrate the little things. We've had our fair share of ups and downs this week, but the headlines that tend to get sent home are often the big pictures and sometimes we lose track of the little things that count the most. "Kikkan Doesn't get Gold", "American Women Race in Bikinis", and "Interesting Relay Day" are headlines that are sometimes true and sometimes missing the point by far.
The day of the Olympic sprint was definitely bittersweet for me. I felt amazing during my race prep the day before the sprint and was filled with excitement up until the morning of the sprint. When I woke up, I was finally starting to feel nervous, but that's to be expected. I had the best race of my life. I qualified 9th, made it through quarters and semis, and before I knew it, I found myself in the final at the Olympics. I couldn't believe it - I felt great and was ready to go for it. Unfortunately, I got in a little tangle and fell, ending up last in the final, but 6th in the Olympics! I felt like I heard from every person I've ever met after my race and I can't thank everyone enough for all the support and nice messages. The bittersweet part of the day was that Kik, our leader and a gold medal favorite, got knocked out in the quarter finals. There have been a ton of articles about this and I think a lot of them have done a great job highlighting the fact that gold medal or not, Kikkan is one of the most inspiring athletes and best teammates our sport has ever had. She's paved the way for the rest of us and whether she has a medal or not doesn't change any of that.


So back to the little things. After the qualification in a sprint, we all put our feet up and rest for about an hour before the heats start. It's an easy time to get nervous because you're just waiting to go ski. It's especially easy to get nervous when you're doing it at the Olympics. When we sat down to rest, Ida looked over at me and said, "Hey Soph, we're now officially Olympians." Neither of us had done the pursuit race a couple days before or been to the previous Olympics, so after completing the prelim, we had both officially completed our first Olympic race! It was crazy how much this put things into perspective for me. I went from being extremely nervous to just being straight up psyched in a matter of seconds. It didn't matter what happened next because we were Olympians and how cool is that?!?


I didn't get to see Kikkan after her quarter final. I did my semi final and I was spinning before my final and about to head to the start area when I turned around and there she was with a huge hug, smile, and "good luck" for me. This was one of the moments that I'll remember most from the day and even though it wasn't the headline of any article, it described Kikkan and our team to a T. And it wasn't only Kikkan. There was Andy's calm mellow manner and pats on the back before each heat, Jessie offering to just sit there and talk for the sake of hearing someone talk while I was nervously spinning, Ida running around to find me Gatorade, Simi's hugs, my teammates who weren't racing that day going out on the course to cheer, seeing Zach's eyes get a little watery after my race, having Grover be the closest thing to my dad that I could ask for in the start/finish, and hearing Matt's cheering (which is hands down the best of any team and any country) throughout the entire course.


I need to head out on course to cheer our boys on in the 4x10km relay right now, so I will say some more about our "bikini ski" and the women's relay later. To set things straight though, Sadie and I did NOT ski in bikinis - we raced in tank tops during the 10k because it was so hot out. It was pretty funny and unexpected to see how much hype there was about our outfits.

And to set one more thing straight, we knew and still know that on a good day our relay team could medal, but they were in no way a disappointment yesterday. They each went out and skied their hearts out and functioned as a team. When Sadie and I were walking back from dinner last night, Aino-Kaisa Saarinen (who skied on the silver medal team for Finland) pulled us aside to say something. She attended the glacier camp with the US women's team two summers ago and she wanted to say thank you. She said the US women's team taught her that it was okay to have fun and to operate as a team and not always be so serious. She said she brought her relay team inside to play karaoke and other fun games the night before the relay and she started crying as she thanked us and told us that she hoped we took something away from her being at our camp because she had so much to thank us for. So that was pretty cool :) 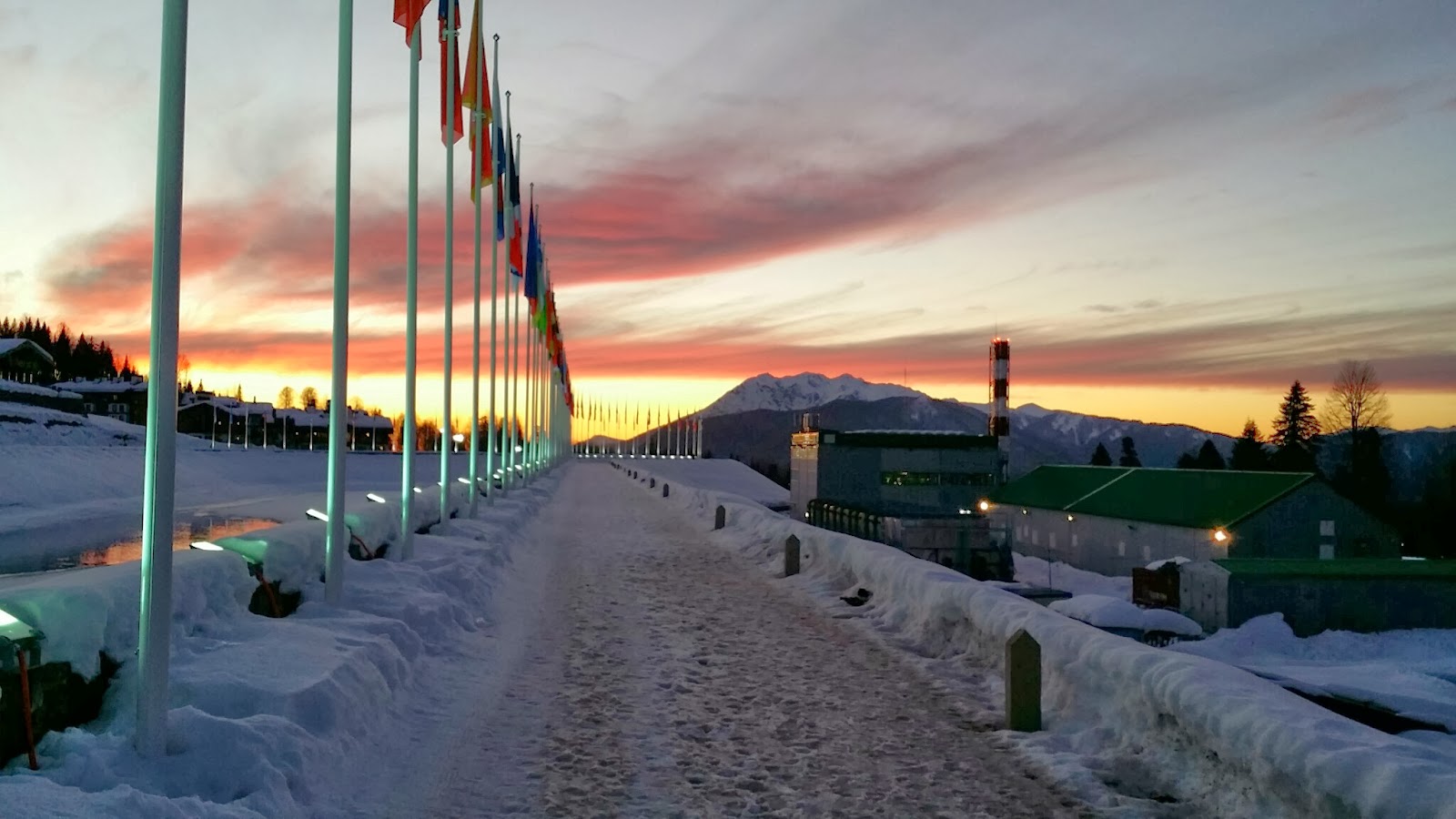 Posted by Sophie Caldwell at 4:00 AM 6 comments:

This is our 5th day in the Olympic Village and a lot has happened in the past five days. The women's skiathlon was yesterday, the men's skiathlon was today, we had opening ceremonies Friday night, and there are always multiple events playing on our TVs providing us with plenty of entertainment. I'm very proud of all of our girls who raced yesterday. Jessie and Liz placed an amazing 8th and 12th respectively, Sadie was just out of the top 30 in 31st, and Holly had a tough one, but finished with a smile on her face like she always does. Our boys had a solid race this afternoon. Their race was 30 kilometers on some seriously tough courses. I was happy to be cheering from the side! Here are some more photos from the past few days. Most of them are from Opening Ceremonies because we were pretty freaking excited! Two more days until my first race! 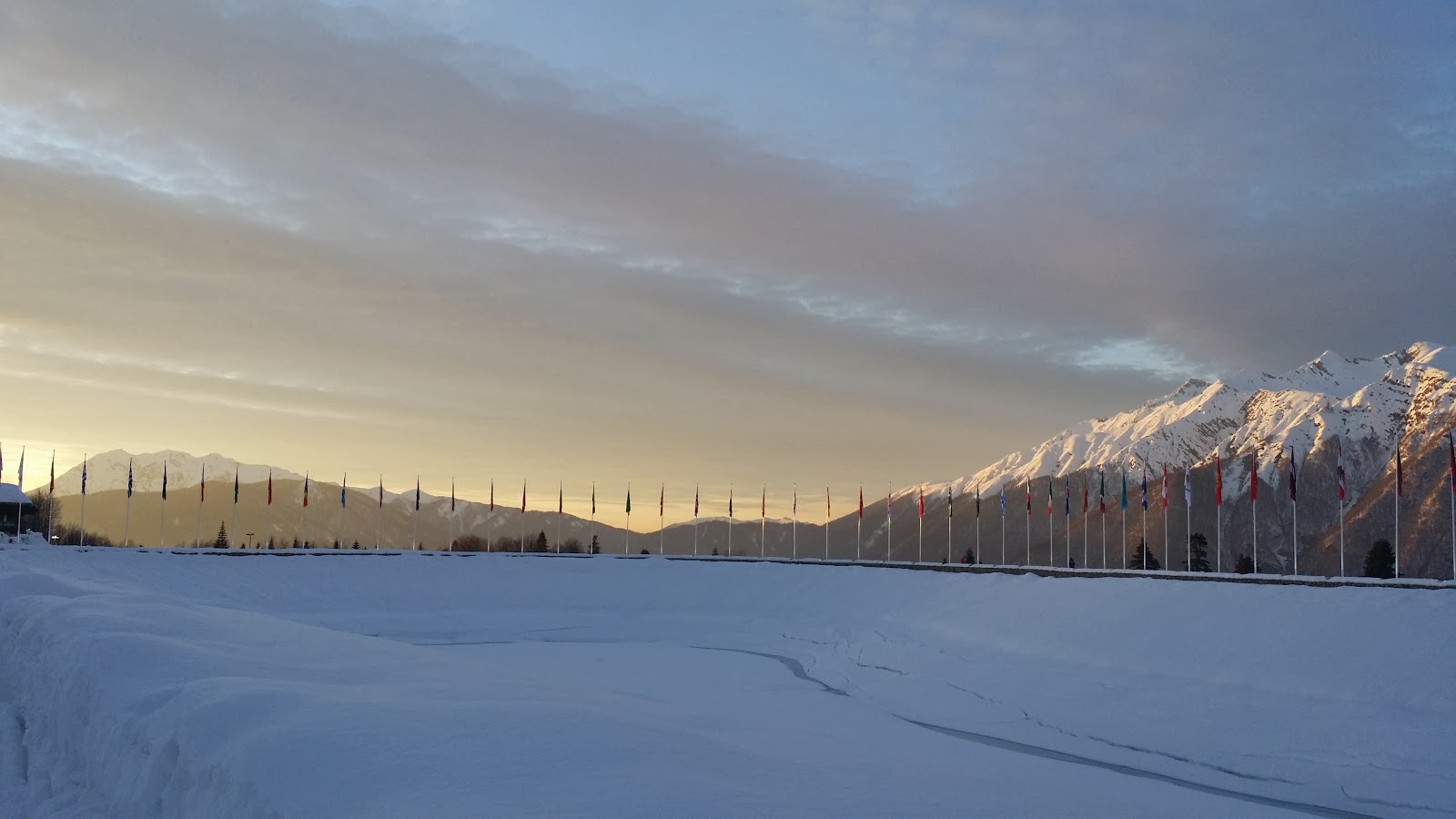 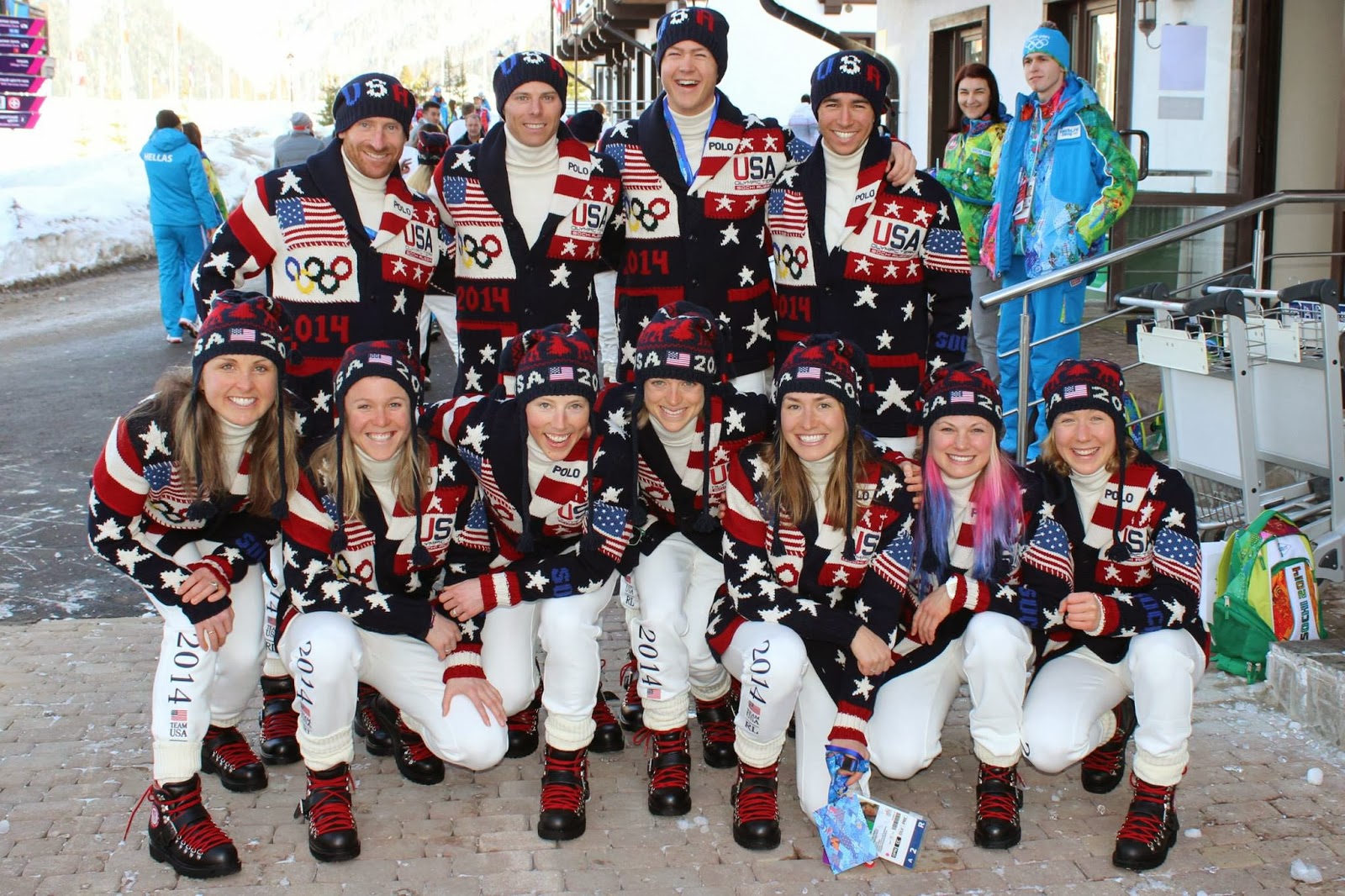 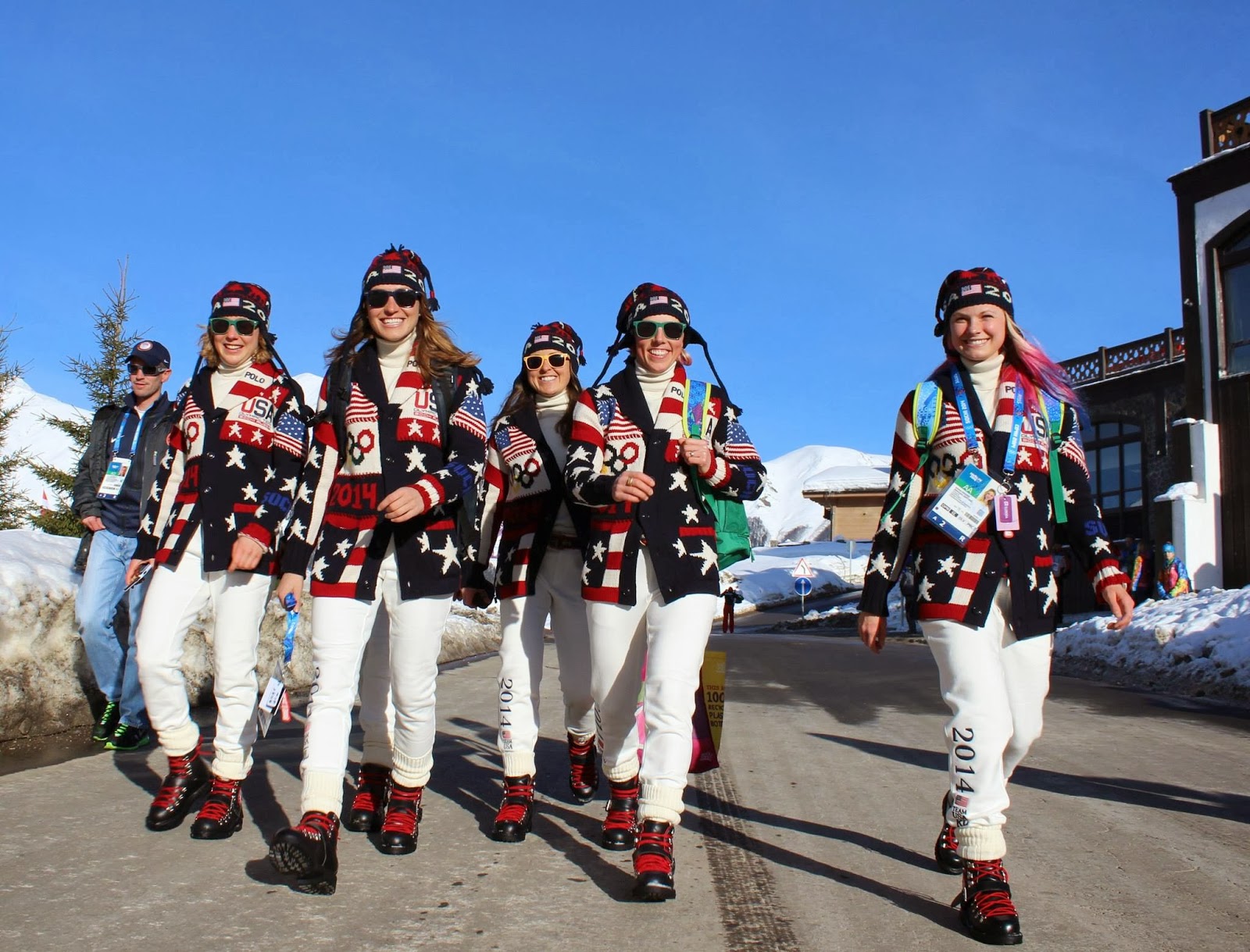 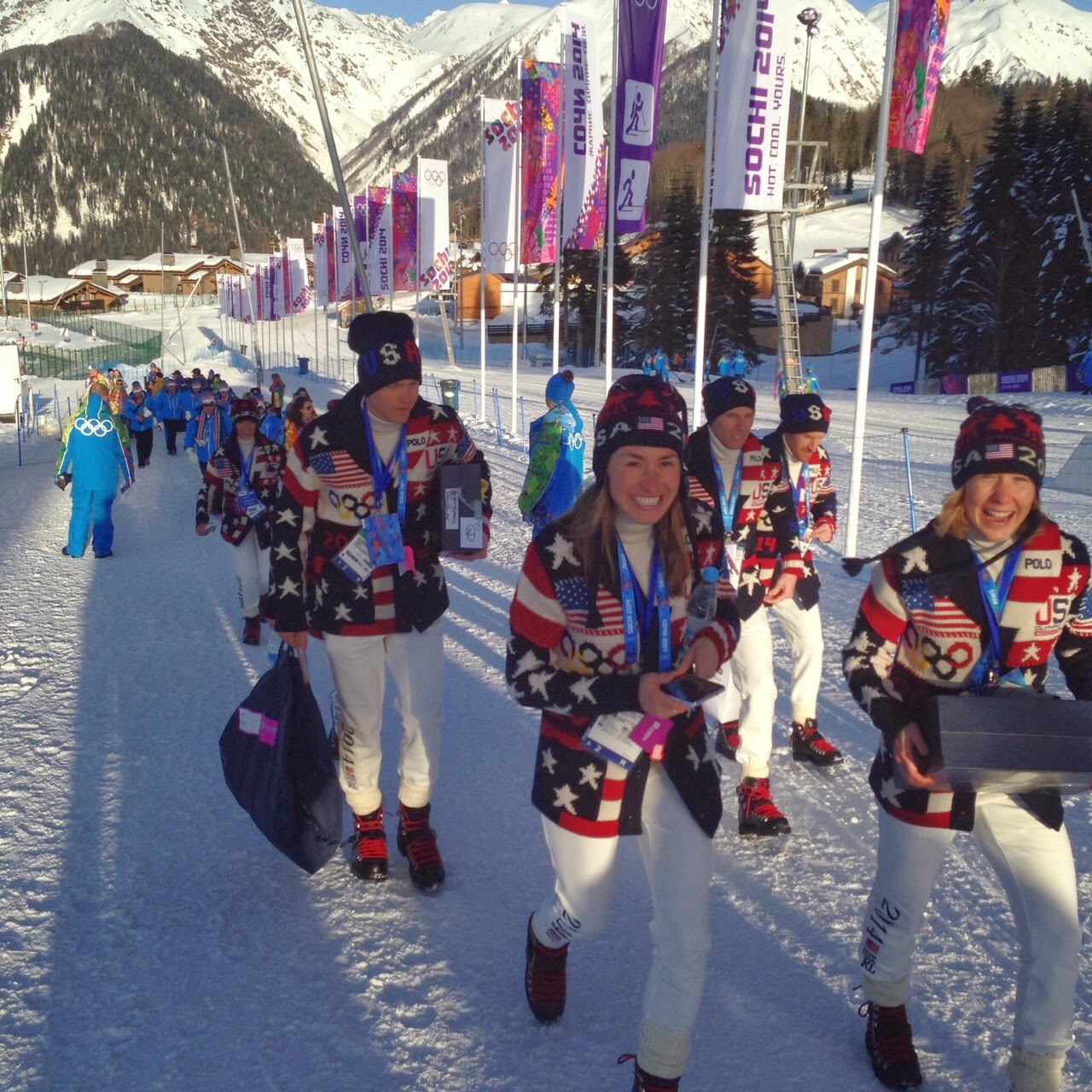 Posted by Sophie Caldwell at 7:24 AM 4 comments: