And the race season is underway! Before bragging about our delicious Thanksgiving feast or talking about the races in West Yellowstone, I think it's important to congratulate the US women on their first world cup weekend. THAT WAS CRAZY! I know we were all super excited to wake up and check the results each morning. Each one of them is an impressive and talented woman and when you put them together, they're quite the force.

We also had our first races of the season in West Yellowstone this past weekend. There wasn't snow down below so the races were moved to the plateau where they held a 9k individual skate race and a skate prelim. The prelim did not count as a Supertour race and the skate sprint will be held on Thursday in Bozeman, the classic sprint will be on Saturday, and the classic mass start race on Sunday. Before our first race, we prepared a delicious Thanksgiving feast on Thursday night. Here are some photos from our evening of preparation.

By the end of Thursday night, we were well fueled and ready for our first race. Individual 10k skate races have always been and struggle for me. I'm not sure why it is but I think I tend to begin skiing them like I would race a 5k and then naturally get a littttle tired by the end. I won't say Friday's 10k felt easy and I definitely still have some pacing to figure out but I was very happy with my result. As a team we had some solid performances but I think a lot of people were left wanting a little more. Results can be found HERE. One of the most exciting things about the day for me was seeing my former teammate, Rosie Brennan, take the win! That girl has had some unfortunate strokes of bad luck the past few years and it's awesome to see things coming together for her. Rosie was my captain during my junior year of college and my teammate for three years and I don't think I've met anyone who is as much of a team player and great leader as she is so Annie, Erika, and I were really excited to see her name up top. Speaking of teammates who are killing it, it was awesome to see Ida do so well in the sprints in Finland the other weekend and to watch Jessie anchor the relay today. I have some pretty impressive friends!

We had a sprint prelim on Saturday that was quick and fun! It was a very flat course that finished with a long gradual uphill. I felt great on the flat sections and then tried to hold on and have a strong finish on the gradual uphill. I ended up winning the prelim, Annie was 8th, Erika was 9th (not bad for someone who thinks they can't sprint ;) ), Skyler was 5th, and Eric was 12th so we had a great day as a team! Results can be found HERE.   HERE is a nice little video Annie's mom, Holly Hart, put together with some footage she took over the weekend. It was great to have Holly join us for the week and we also have to credit her with the success of our Thanksgiving turkey. Annie is famous for doing a great job warming up. She usually plugs her ipod in and dances around and by the time she's at the start line, she is well warmed up and psyched to race. I've always been very impressed and recently found the following video that reveals her aggressive side and secret to success. Click Here!


Yesterday we drove to Bozeman and had a birthday dinner for Erika because today is her 23rd birthday! This morning we had a delicious waffle breakfast at her friend's house and then had a girls' day in town. Don't worry, we came back in time to cook the guys dinner. We have a couple of easy days before our next race on Thursday and we hear the skiing is beautiful at Bohart right now so we're excited to go check it out tomorrow!

We have been in West Yellowstone for almost a week now and while the snow conditions haven't been ideal, we're making it work! The skiing on the plateau was actually beautiful this morning - the best we've seen it yet. There still isn't skiing in town but we've made the trek up to the plateau almost every day. It was a little rocky the first day and we learned the hard way but it's gotten better each day. Hopefully we get some more snow before the races but that is out of our control so we've just been enjoying the skiing we do have for the moment. Traffic can get a little hectic driving to and from the plateau but the organizers sent out a very detailed shuttle and driving schedule so today we had a seamless commute. Once Isabel joined us in West, we obviously had to do our annual Dartmouth bikini ski. It's supposed to be our first time on snow and Annie, Erika, and I had been skiing for awhile but it was Isabel's first time on snow after looking at rocks all fall. 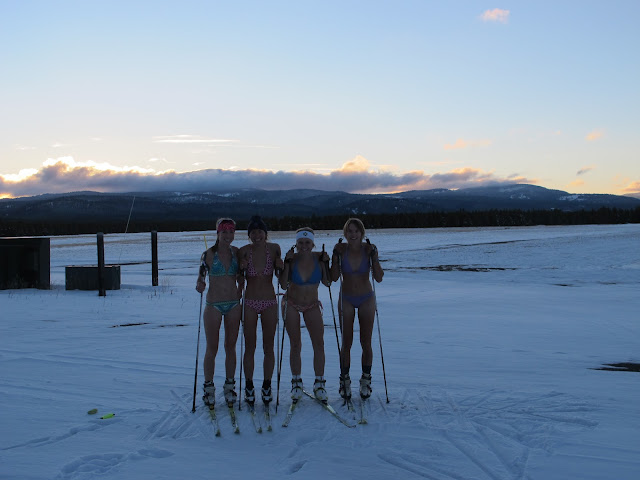 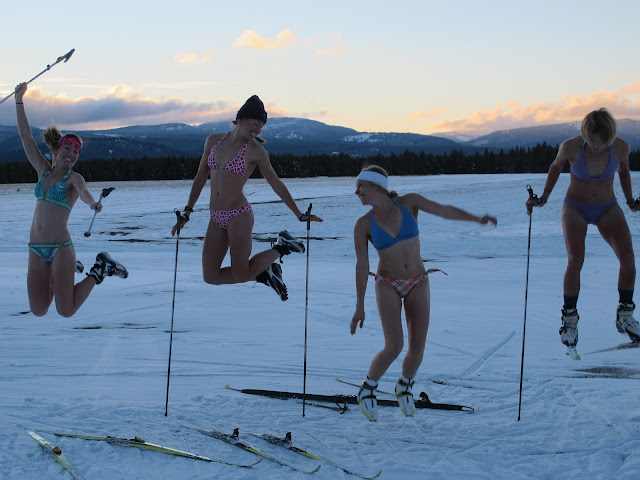 Erika and Annie went to Bozeman to pick up Sverre and Gino and do an OD at Bohart but Isabel and I stayed behind with the boys and did a nice 3 hours skate up on the plateau.

We had an off day yesterday and I'm glad we won't have too many more of those because there isn't a ton to do in West Yellowstone but we entertained ourselves for the day. This morning we did skate speeds that felt good and were very fun. We narrowly avoided what could have been a disastrous pile up during one speed but Isabel made an impressive last-minute move to catch her balance. Gus told us we had to stay focused during out workout so we tried not to do too much socializing but it was fun to zip around and say hi to some friends between speeds.

We have some intervals tomorrow, a very easy day on Wednesday, and then a pre-race ski on Thursday before our first races of the season. There will be a skate sprint on Friday and a 10k skate on Saturday. I think we're all excited to race and the Thanksgiving feast the night before should guarantee that we have plenty of fuel (don't worry, Erika has made a spreadsheet complete with a shopping list and cooking assignments)!
Posted by Sophie Caldwell at 6:08 PM 4 comments:

After our camp in Canmore, I spent 10 very relaxing days at home. It was nice to see my parents, eat home cooked meals, and absorb the training we had just done in Park City and Canmore. I jumped in a lot of workouts with the SMS team which was a lot of fun and they're all looking very fast so watch out! I also did some workouts with the PGs and SMS T2 people who were back in Vermont. As much as I like our boys, by the end of the 10 days I was definitely missing Erika, Annie, and Jessie. Everyone went home for the time between camps so they were in Montana and Minnesota, leaving Doph and the Dudes! While I was home, some of the more exciting workouts I did were a sprint simulation with the SMS team, some hard bounding intervals with Gus and Skyler, and a beautiful hike up Stratton where they are currently making snow! Here are some photos from my time at home.


Andy, Skyler and I also visited my elementary school, Flood Brook Union School, to talk to the 5th, 6th, 7th, and 8th graders about cross country skiing and staying active. Andy definitely ran the show but Skyler and I chimed in every once in awhile and the kids were a wonderful audience, asking a lot of great questions.


Last Friday we flew to Bozeman where we stayed at Erika's house for a few days. Thank you to Erika's dad, Pat, and his fiancee, Melissa, for sharing their home and being so accommodating! We heard the skiing was better in Bozeman than it was in West Yellowstone so we tried to get in as much skiing as possible before heading to West. We skied at Bohart a couple times which was fun because last time we were there was for NCAAs when Annie, Erika, Eric, and I were skiing for Dartmouth! We also did skate threshold intervals in town one day and I learned my lesson: recovering at altitude is a little harder than it is at sea level so proper pacing is important! I've loved being back with my training buds, Erika and Annie (miss you Jessie!) We also went to see the new James Bond in Bozeman and overall the group gave it very good reviews! Yesterday we drove to West Yellowstone and it was snowing a little when we got here, it was snowing a little when I woke up this morning, and the ground is white so hopefully we can find some decent skiing. Today is our off day so we woke up and made my family's secret stackers recipe.


We will be in Yellowstone through the first Supertours and my dad and Skyler will be joining us soon. The most exciting news for me is that my sister, who has been on the Earth Science program out west all fall, is coming TOMORROW! I've missed her so much and can't wait to see her and hug the life out of her. Time for some exploring, check back soon for some ski reports! And good luck to our T2 teammates, Jessie and Andy, who will be doing their first races this weekend! Here are some photos from the last couple of days in Canmore. We had a team photo shoot with our new uniforms because it was probably the only time we'll all be in the same place for awhile.