After a bit of a slow start to the season, the US team seems to be hitting a high note at just the right time. It's never easy to start the season out a little slowly, but we know our biggest competitions are in late February and if racing a little slower in November means racing a little faster for World Champs, it's usually worth it.

We just finished up our Eastern European World Cup Tour with a race weekend in Otepaa, Estonia and a weekend in Rybinsk, Russia. We didn't see as much sun and delicious pasta as we usually do in central Europe, but the fans were some of the kindest and most excited that we've seen all season. It's easy to get psyched about ski racing when the stadium is filled and the trails are lined with fans who cheer for everyone.

Our team left Russia with some of our best results of the season. The full World Cup field did not attend the World Cups in Rybinsk, but there were still a lot of very strong skiers there and I thought we skied extremely well. The highlight of the weekend was watching Liz get her first podium when she placed second in the 10k skate. Rosie Brennan just joined our team in Europe and hopped onto the World Cup like a pro, getting two top 20s in the distance races! Jessie also had a great weekend with two 5th places and on the sprint day we had four girls in the top 13! I tied my best result of the season and placed 7th in the skate sprint. When we arrived in Russia, we were welcomed with -25C temperatures, but luckily it warmed up to normal race temps by the time the weekend rolled around.


We are now back at our home away from home. We had a long travel day that consisted of a bus ride, a flight, and a long drive from Rybinsk to Davos, but we're all settled in to the Hotel Kulm. It looks completely different than it did when we were here in December. There is enough snow to ski from the Hotel and it continues to come down. We're here for the next two weeks preparing for our World Championships that are coming up in a few weeks. I'm happy to be settled into one place for awhile without having to worry about travel. In other exciting news, our World Championships team was just announced. We have a huge team coming to Sweden consisting of eight men and eight women. It's going to be a very strong team. You can read more about the team selection HERE. Our U23 and World Juniors team also just departed for Kazakhstan. Their races kick off in about a week and we will all be cheering them on from Europe and from home. Check our our SMS T2 blog for updates from all of our team members.

Posted by Sophie Caldwell at 2:50 AM No comments:

The day after our last race in the Tour, a group of us packed up and headed from Toblach, Italy to Ramsau, Austria for six days of recovery and skiing. The only other time I had been to Ramsau was when I was there with my family over Christmas last year. This was my first time staying in the cozy Hotel Kobaldhof that the US Ski Team always stays in on trips. When we arrived, there was plenty of snow. The hotel owner said it still wasn't a ton, but there was significantly more snow than there was when my family was there last year and I was excited by the prospect of being able to ski out the hotel door.

I was glad I got out for a ski the first day because the following day the temperatures rose and we were sunbathing on our decks. That night it poured and we woke up the following morning to much less snow. It continued to stay warm and rain through the next day and night and we lost even more snow. We could no longer ski from our hotel, but the stadium still had enough snow to ski on and make a pretty good loop out of. Luckily, my training plan mostly consisted of off days and rest days in the beginning, so the lack of snow wasn't too much of a problem.


When we woke up Monday morning, the rain had switched to snow! The ground was once again covered in white and we could ski from our hotel. Sadie and I went on an awesome classic tour  on many of the open trails. Our last two days in Ramsau were perfect. The sun and snow came just in time to start a little training after our rest period.


On Tuesday afternoon, we drove to Munich, Germany. We reorganized all of our belongings and packed for the next 12 days in Eastern Europe. Our first stop is Otepaa, Estonia for a World Cup sprint weekend and after that we head to Rybinsk, Russia for a skate sprint and two distance races. Eastern Europe usually doesn't come with the sun and food that central Europe has, but it's always an experience and a fun part of our European tour. We arrived in Estonia last night and went for our first ski on the courses this morning. Everything looks great and we're looking forward to getting our sprint on in two days! 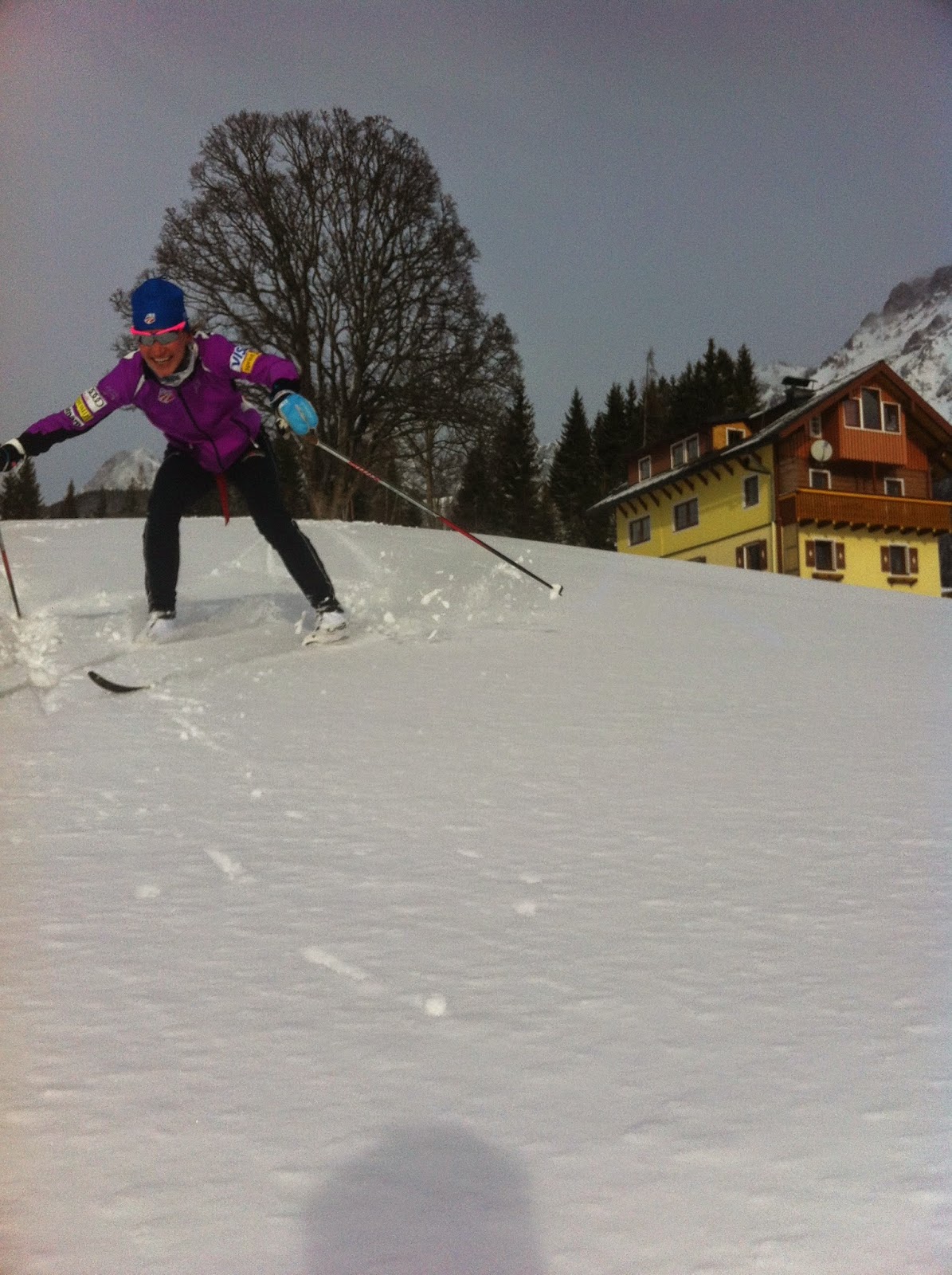 Most of us have completed our stint in the Tour de Ski this year. We raced four races in five days, which seems like a lot until you compare it to some other teammates who are doing seven races in nine days...yikes! One of the not so cool things about the Tour is that you get really tired, but one of the really cool things about the Tour is that you get really tired, and so does everyone else, and you never know when you can pull out a great race. For most people, myself included, the Tour is a mixed bag of highs and lows. The highlight of my Tour was definitely the skate sprint where I had my best result of the year so far, qualifying and ending up in 7th. My distance races weren't anything to write home about, but I feel like I'm taking baby steps in the right direction and it never hurts to get some more races under my belt!

Our Tour de Ski began in Oberstdorf, Germany with a skate 3k prologue, and a classic pursuit start 10k. Our first days in Oberstdorf were filled with blue skies, sunshine, and plenty of snow from the storm they had before we arrived. The night before the classic race it poured and was extremely windy, but the organizers did a great job of scrambling to make the race go off without a hitch. The prologue was a very hilly course. I didn't have a great race, but it was awesome to see my teammates Sadie and Liz place 7th and 8th. Sadie is sometimes labeled as a classic skier and Liz as a long distance skier, so they proved otherwise by kicking some butt in a short skate race. My classic race started off well, but went downhill quickly after the first third. It was a tricky waxing day and an easy course to get tired on. Sadie and Liz continued to have strong Tour races and both ended up in the top 15 after the day.


The afternoon of the classic race we packed up and headed to Val Mustair, Switzerland for a skate sprint. We had a day off in between the 10k and the sprint to rest up and preview the course. Switzerland rarely disappoints as far as weather goes, and this trip was no exception. There wasn't any snow, but a clean white race course was laid out for our sprint in the middle of a field. It was a two lap course that was on the long side for sprints. On the morning of the race, I woke up a little sleepy after a restless night of sleep (I blame the full moon), but if I've learned anything, it's that you can still pull out a good race even when you're not feeling 100% when you wake up and start skiing. Because of the course length, I had a pacing strategy that I focused on for my prelim. I had no idea how I had done when I finished because racing on a hard course at altitude never feels good, but I crossed the line in 7th! I went on to win my quarter final in a close lunge and then place third in my semi final. Unfortunately, my semi final wasn't fast enough to be lucky loser, so I missed making the finals, but ended up 7th in the race. This was my first top 10 of the season and I was really happy with how the day went. As a team, it was one of our best days of the year so far. Simi placed 8th, Kik was 10th, and Sadie was 13th. Jessie also qualified for the heats and Andy was going really fast in his prelim until he had an unfortunate crash on one of the many icy downhill corners.


After the sprint, we drove to Toblach, Italy for the next set of races. Yesterday was a 5k classic for women and a 10k classic for men. My result wasn't anything exciting, but I had some moments where I felt really good, so I was happy with the day. What made me even happier was seeing my bud Sades place 8th, only 9 seconds off the freaking podium. Watch out for that girl!
Andy, Simi, Sadie, and I drove to Ramsau today for five days of recovery and training before we head to Estonia for the next World Cup weekend. Ramsau has plenty of snow and we are staying in the cozy hotel that the US Team always stays in. I'm psyched to be in a place where we can ski out our door, sauna at night, and put our feet up for more than a few days. We will have plenty of entertainment as we cheer at our TVs and watch the rest of the Tour. Thanks for following!