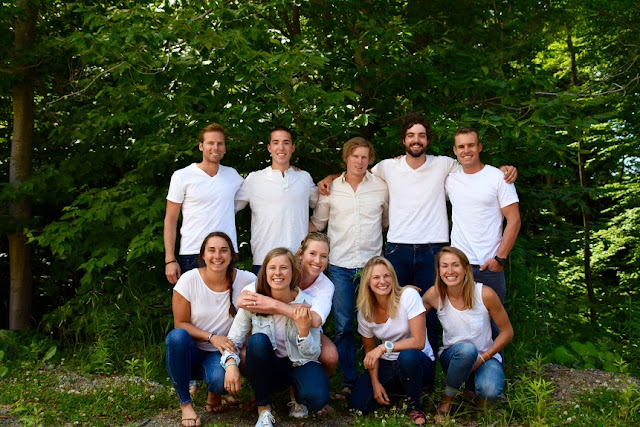 The SMS T2 Team is an elite cross country ski team based out of Stratton Mountain, Vermont.  We train year round in the Stratton Mountain area with the Stratton Mountain School and our goal is to achieve international success and one day bring an Olympic medal back to Vermont.  In order to do this, we need support and one of our primary goals is to grow a large support base in southern Vermont.  We plan to do this by being active in the local community and encouraging others to get involved, while helping future generations achieve success in all facets of life.

The SMS Elite Team is a newly formed professional ski team based out of Stratton Mountain, Vermont.  It is comprised of 6 of the most talented skiers in the United States, all of whom have
Olympic aspirations in 2014.  It is coached by Patrick O'Brien. The roster is below:

Andy Newell (Shaftsbury, VT): Andy is a member of the US Ski A Team and has competed in the last two Winter Olympic games.

Simi Hamilton (Aspen, CO): Simi is a member of the US Ski A Team and competed in the last two Winter Olympic Games. Four World Cup Podiums in the last three years.

Ben Saxton (Minneapolis, MN): Ben was a member of the 2015 World Championships team, has raced World Cups, and been in the top 10 at U23s.

Jessie Diggins (Stillwater, MN): Jessie is a member of the US Ski A Team. Jessie is a World Champion and World Cup Champion.

Sophie Caldwell (Peru,VT): Sophie is a member of the US Ski A Team, World Cup winner, and olympian.

Erika Flowers (Bozeman, MT): Erika graduated from Dartmouth in 2012 where she was a three-time NCAA All-American skier. She is a Supertour winner and has raced in World Cups.

Julia Kern (Boston, MA): Julia has a World Juniors top 12, WJ relay podium, and has finished on the podium in OPA junior races. She is a junior national champion.

Katharine Ogden (Landgrove, VT): Katharine has been on the podium at World Juniors in both individual and relay events. She is a multi time junior national champion.