Our second World Cup in Davos was a successful one, with some of our best races of the year as a team. Liz barely missed the top 10 and placed 12th in the 10k skate race, while Sadie and Jessie also placed in the top 30. On sprint day, Simi, Kik, Jessie, Ida, and I all qualified for the heats. Unfortunately, four of us ended up falling in our heats, but Kik and I did make it into the semis before we fell, so we ended up 9th and 11th on the day. After a busy period one of racing, I think we were all ready to relax and not worry about races for a couple weeks. This was the first Christmas I had ever spent away from my family and I missed them dearly, but we managed to all have a wonderful Christmas in Davos by doing some of the following...


1. Building a snowman! After the first significant snowfall ten days ago, Jessie and I decided we would build a snowman. He didn't last long, but he looked great for the evening.


2. Surrounding myself with some things that reminded me of home.


3. Training smart, but training fun. One of my favorite things to do in Davos is to go for tours up the valleys. There wasn't much snow at the beginning of our break, but on the first sunny day, we decided to take our rock skis and see how far up one of the valleys we could make it. It's been my favorite ski of the year so far. Other examples of making training fun have been going for night skis and skiing back and forth between each other's apartments instead of driving. 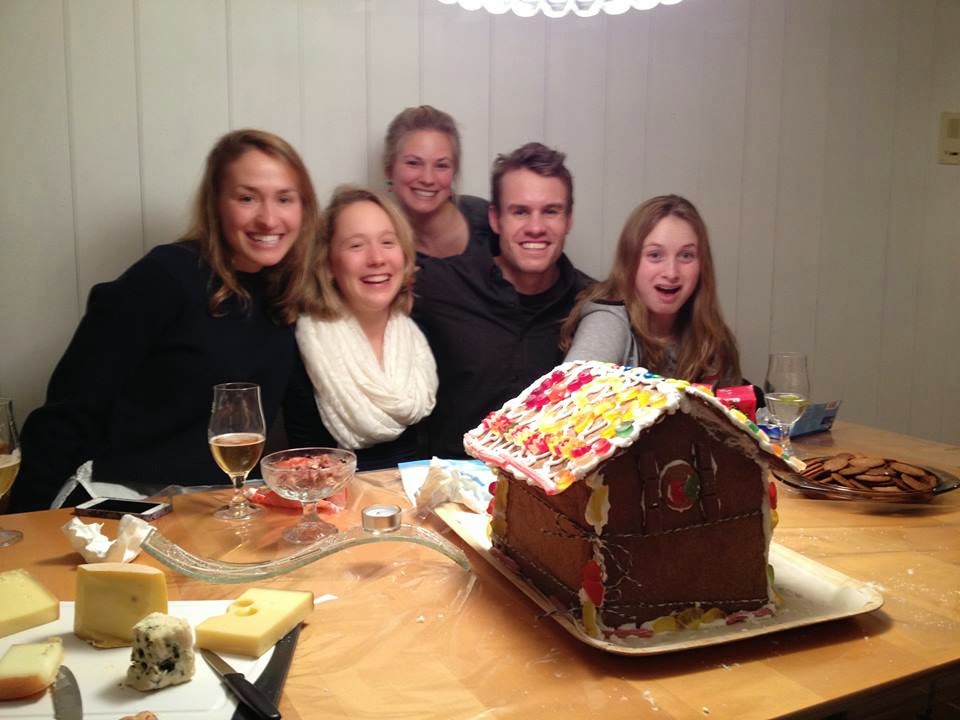 Posted by Sophie Caldwell at 4:22 AM 3 comments:

The races in La Clusaz were cancelled this weekend, but Davos stepped up and is holding them instead. The race formats were changed to a 10k skate and skate sprint instead of the original 15k skiathon and relay. This means that the distance race will be on the same course as last weekend, but will be skate instead of classic, and the sprint will be exactly the same as last weekend. Last weekend was a good weekend for the US team with Liz, Jessie, and Sadie all placing in the top 25 in the classic race and four of us qualifying for the sprint rounds. I qualified 23rd and ended up 22nd last Sunday. I was very happy to be feeling healthy and skiing in the rounds again! Andy skied a strong sprint and ended up 15th and Ida was close to making the semis and ended up 16th.

The long term snow forecast for central Europe is looking a little grim, especially where my family was planning to go for Christmas. As a result, they had to cancel their trip because snow was hard to come by and logistics were getting too complicated. I'm sad I won't be able to see my family for Christmas, but the majority of our team has changed their plans to stay in Davos over Christmas, so I'll be able to spend it with my second family. By the time Christmas is over, we will have spent over three weeks in Davos. It's starting to feel a little like home, and by the end of the winter we will have spent over 1/4 of our time in Europe based in Davos. It's too bad the snow gods aren't cooperating, but it is nice to stay in one place.


The weekend of racing begins tomorrow and the team is ready to go! It's crazy that period one is already coming to an end. I suppose it's a good sign that time flies while we're over here. Happy holidays and thanks for following!

Posted by Sophie Caldwell at 7:59 AM No comments:

Our week in Lillehammer wasn't the best weekend we've had as a team, but there were some highlights that should be recognized. Sadie had a really solid weekend, placing in the points in every race. Liz and Jessie stepped it up in the skate 5k and flew around the hilly course, and Erik had a really fast time in the classic 15k where he was pretty darn close to scoring points. I did all three races and even though the results weren't pretty, I was happy to put a bib on again and begin my season. The World Cup field is a tough one to jump into if you're not feeling at the top of your game and the World Cup field in Norway is even tougher. It wasn't easy seeing my name down at the bottom of the results lists, but luckily I have an awesome support group of teammates, coaches, friends, and family to remind me that being able to race right now period is an accomplishment in itself.

We were all pretty exhausted after three consecutive days of racing. On Monday afternoon we hopped on the plane and flew to Davos, Switzerland. We don't technically have a home base in Europe, but if we did, it would be Davos. So, it's nice to be back "home". We always stay in the Hotel Kulm and we have quite the history here. The owner knows us all by name and my uncle Tim actually stayed here with the US team back when he was racing World Cups. Davos doesn't have a ton of snow right now, but the volunteers are doing a great job of putting together a race track. Davos is a beautiful place to be and we've seen a mix of flurries and sun since arriving.


A few of us drove to Livigno, Italy to switch things up yesterday. It's a pretty long drive, but we went for a nice ski on some new trails with a little more snow. After our ski, we went out to lunch at one of the local pizzerias before heading back to Davos. I enjoyed seeing a new venue and taking a day for an adventure.


The race weekend kicks off tomorrow with a 10k classic. I will not be racing tomorrow, but I'll be racing in the skate sprint on Sunday. We just found out that the World Cup in La Clusaz next weekend is cancelled, so we're waiting to hear if there is a backup venue and deciding what our plans will be next. Regardless of where we are next weekend, only ten days until my family comes over for Christmas!

After a week of training in Muonio, we packed up our bags and drove to Kuusamo, Finland. Unfortunately, I came down with a little cold, so I didn't get to do very much skiing in Kuusamo. I was giving my elbow another week of rest before racing anyway, so it didn't change my racing schedule at all. Similar to Muonio, Kuusamo is another winter wonderland. The sun never really hits the ski trails, but every once in awhile you catch a glimpse of it and it's quite beautiful.

We packed our bags and traveled to Lillehammer on Monday evening. I love coming to Norway to ski because EVERYONE in Norway loves cross-country skiing. You're in the minority if you don't cross-country ski or at least follow it here. We went up to Sjuesjon to train our first couple days here. They have a little more snow and the terrain isn't as difficult as the hilly courses at Lillehammer venue. Our first day was so foggy you could barely see the trail in front of you, but on our second day we were greeted with clear skies, a beautiful sunrise, and plenty of snow. 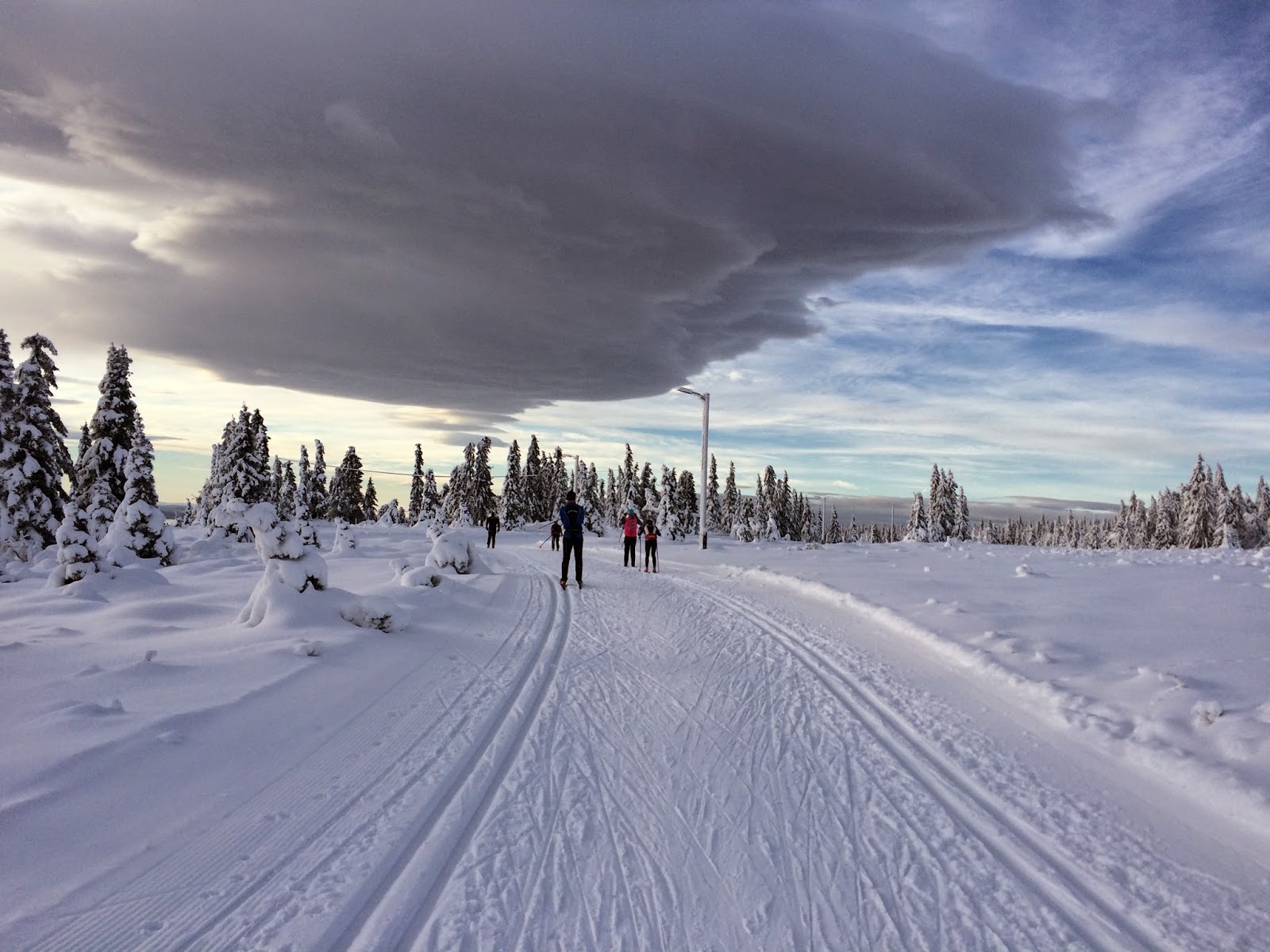 I'm feeling healthier each day and it's felt really good to get back on skis this week. My elbow is also doing great. I've done some speeds, some intensity, and even a little upper body strength. Our PT, Pete Dickinson, has been amazing to have on the road with us and he's been documenting my strength and recovery nicely.

Pete has cleared me to race this weekend, so I'm getting back in the race routine beginning with a skate sprint tomorrow! There are two distance races over the weekend and I'm planning on seeing how my health and elbow are feeling each day before deciding if I will do those races. I have zero expectations going into these first races because it's been a bit of a crazy summer and fall, but I'm looking forward to putting on a race bib again and am happy to be back on the trails with my team. Thanks for following!


Posted by Sophie Caldwell at 9:08 AM No comments: