We had a frantic afternoon of packing everything up after the race on Sunday before driving to Oslo and catching our flight to Finland the following morning. We saw very little sunlight on Monday because by the time we landed in Finland, the sun was setting. I checked my phone this morning and it says sunrise is around 9:30 and sunset is at 2. Besides the lack of sun, Ruka is a pretty cool little resort town. It's very touristy, but it feels like a winter wonderland right now. It's very cold, but it's not unbearable...yet. The races this weekend are in the format of a mini tour. We have a classic sprint on Friday, a 5k classic on Saturday, and a 10k skate that is a pursuit start on Sunday. This means that your start handicap is determined by how you placed in the first two days and then the first person to cross the line wins the overall tour. Here are a few photos from our last week.

Posted by Sophie Caldwell at 8:30 AM 4 comments:

I had a busy day of packing on Thursday, but was able to enjoy a lovely early Christmas dinner with my family the night before I left. I also made a quick trip to Hanover to catch the Boston Coach to the airport, so I was able to get a lot of hugs from my friends, the most important item on my todo list for my last day.

We arrived in Beitostolen on Saturday with all of our bags after an easy night of travel! Flights over to Europe are generally at night, so we try to sleep as much as possible in order to adjust to the time change. I've tried many different sleeping positions on the airplane and none of them seem to work, so I ended up sleeping an hour or two and being uncomfortably awake for the remainder of the flight. We're six hours ahead of home, so I'm still adjusting to the time change, but it's getting a little easier each day.

We have about 5 kilometers of skiing in Beito and there are A LOT of Norwegians who love to ski. There were so many people over the weekend and it has quieted down a little since kids had to go back to school, but these are the opening races for the Norwegians, so the racing crowd is starting to trickle in. There isn't a ton of snow, but it's 3 more km than we were skiing on in Canmore, so I'm not complaining. One step at a time!
We are staying in one of the few places where we have kitchens and do our own cooking. Each cooking group has made delicious dinners, highlighted by the coaches' gourmet bruschetta and pasta creation last night. To top that off, we went over to the Norweigan women's team condo to enjoy some fresh bula for dessert.

Our first races of the year are this weekend. There is a classic distance race on Friday, a skate distance race on Saturday, and a skate sprint on Sunday. Most of us will be choosing two of the races to do and I will be racing the classic distance and the skate sprint.
Including coaches, there are 18 of us here right now. It's a big group and a lot of fun to be a part of! My other half of Sodie, Sadie, has her 24th birthday tomorrow, so we're going to have to think of a special little celebration for her. Happy Birthday Sades!

Posted by Sophie Caldwell at 8:43 AM 5 comments:

I have one more day at home before flying to Europe for up to five months! I'm very good at procrastinating and not very good at packing, so today will be a stressful day of organizing and last minute goodbyes. We had a very hard week of training last week with a couple time trials, intervals, and some longer workouts. We also did the Stratton hill climb as an NNF fundraiser. I don't think I had done that race for about four years and it was just as hard as I remembered. Thanks to everyone who came out!


On Monday, I stopped by the local West River practice that was being held at Flood Brook. West River is the ski club I grew up skiing with and I went to Flood Brook School from kindergarden through 8th grade, so it was a fun blast from the past. We went for a warm up jog before playing over an hour straight of capture the flag. It was so hard and those kids are fast! My team lost and I can't say I was a very valuable player, but we had fun sprinting back and forth. Thanks to Kate Koch and John Ogden for letting me come out to play! 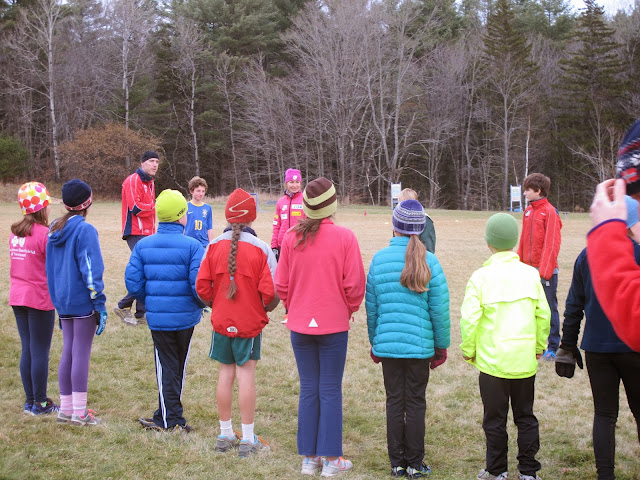 On Tuesday, Liz, Andy and I went up to Hanover to do some filming with News Channel 5. It was FREEZING outside and we all started the ski in our down jackets and warm up pants before overheating and then refreezing. News Channel 5 is doing some stories on potential VT olympians and they met up with Ida the following day. You can watch the preview to the story HERE. Being from Vermont is something I've always been proud of, but I hadn't considered how neat it really is that four out of the eleven of us on the U.S. Ski Team are from such a tiny little state. We're very lucky to have grown up in such supportive communities, so thanks News Channel 5 for taking the time to get us together and document our stories.

I haven't been able to ski on snow here yet, but I've heard there is some good skiing in Northern VT right now. Even though it hasn't stuck, the past few mornings I've woken up to a snow covered ground and the ski mountains are blowing snow like crazy so they can open for Thanksgiving weekend. This is a tough time of year to motivate myself to rollerski. We've been rollerskiing since May and it doesn't help when there's snow on the ground, but that's where it's been awesome to have most of my teammates back and the SMS high school team to train with. The high school team has been doing a Nationals simulation this week, so they have three time trials. Coach, alumn, and former Middlebury star, Chase Marston, has come out of retirement for the week, so follow the SMS Blog closely to see how he's stacking up against his athletes.

My sister and brother are coming back from Dartmouth for my last night tonight. My grandmother, Twinkle, is also coming over for dinner and we are going to have an early Christmas dinner. The thought of potentially being in Europe for the next five months is both scary and exciting. I've had a wonderful two weeks at home and now it's time to hit the road. The season is here! I will keep my blog updated this winter. Thank you for the continued support and thanks for following. First stop is Norway tomorrow!
And finally, congratulations on being a Hall of Famer, Dad! I'm sorry I couldn't be there for his induction, but here is a little something I wrote for the occasion.


My sister, brother, and I get asked a lot of questions about skiing because of our last name. The common presumption is that because our last name is Caldwell, there must have been a lot of pressure to ski growing up. I'm not sure we always give them the answer they're expecting when we explain that we did have a choice, there wasn't much pressure, and having our dad as our coach was awesome. It would be easy to be a ski coach and have three children who all hate skiing by the time they reach high school. All you would have to do is pressure them to ski and give them unsolicited coaching advice from day 1. All three of us skied or are skiing through college and we all still love to ski. The reason we still love to ski is because our dad didn't pressure us.  He was dad when he needed to be dad, he was coach when he needed to be coach, and because of that, we all fell in love with the sport for many of the same reasons he did.

Before a race, most athletes like to get psyched up and focused, and having my dad be there in coaching mode was exactly what I needed. Even though he isn't my primary coach anymore, I still like to picture his sound effects before and during races. His "zips, swishes, and whoops" probably sound like a different language out of context, but anyone who has had him as a coach knows exactly what they mean. Zip zip means light on your feet, swish means glide, and whoop whoop means quick tempo, in case you are unfamiliar with those terms of his. After the race is when it's usually nice to have a parent there for a hug and a high five. My dad was there for all of his athletes after their races, but he was also there for us as our dad. He wore the same twinkly smile when I finished my first BKL race and got my purple participant ribbon as he did when I finished my first World Cup race last year. I think it means something like, "If this is making you happy, it's making me happy.” Whether the goal is to make J2 festival or to podium at World Juniors, he makes achieving that goal feel like the biggest accomplishment in the world. That’s why he connects with each kid he works with.

I don't think being coach and being dad are mutually exclusive, but I do think it's difficult to be both, and it's even harder to be really good at both. You deserve this for so many reasons, dad. If there were a dad Hall of Fame, I'd nominate you for that too, and not only because you did it right for the three of us, but because I think you're a bit of a second dad to every kid who has gone through your program. Congratulations, we love you and couldn't be more proud!

Posted by Sophie Caldwell at 9:37 AM 6 comments:

After three big weeks of training out west, I was ready for a recovery week when I came home. We had about five easy days before jumping back into harder training this weekend. It's so nice to be home and it's scary how fast my time here is disappearing. 10 days until Europe! Last week I spent some time in Boston visiting Dan, I visited my sister and brother in Hanover, and I have been been loving the beautiful late fall weather we've had since I got back to Stratton. We have a big week of training this week including our NNF fundraiser hill climb on Saturday. Come over for the day to support a great cause and to find the snow on top of Stratton! 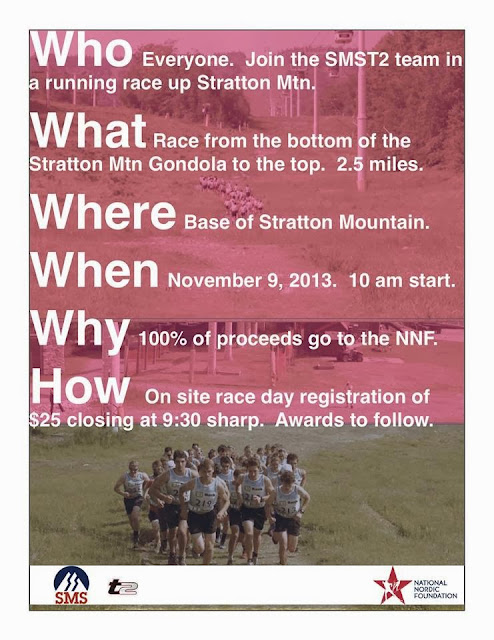 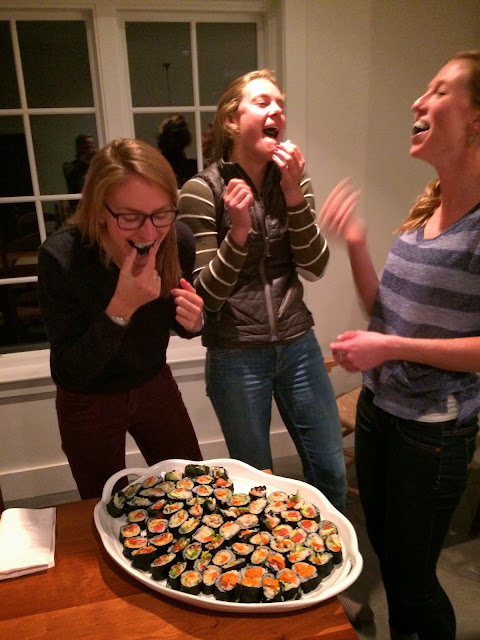 Posted by Sophie Caldwell at 8:06 AM 3 comments: