Davos and World Champs in Photos!!

I'm a little behind on my updating so I'll catch everyone up with some photos!

I spent about 5 days in Davos doing some training and racing the classic sprint World Cup. It didn't go as well as I'd hoped, but Davos was an incredible place and it was a lot of fun to be back at a World Cup! Something worth noting was that Sadie and I tied to the hundredth in a prelim that was over 4 mins - a true Sodie moment!


After the weekend of racing in Davos, we packed up and drove to Val di Fiemme for World Champs!! We were staying in a little town called Predazzo, located about 10 mins from the World Champs stadium. We were also able to ski to the stadium from Predazzo on the Marcialonga trail. This was a nice option because it's very flat and the race courses are very hilly and sometimes hard to train on. I raced the classic sprint at World Champs. I qualified in 30th place, just barely squeaking into the heats. I ended up 4th in my quarter final and 20th on the day and it was so much fun. My heat was extremely hard but I tried to ski tactically well and fight for every position. Personally, I was happy with how my race went, but I know some of my teammates ended up a little disappointed with their results. It was a tricky waxing day and it was a course where you needed skis that were both fast and kicking because it had some big hills as well as a lot of double poling. 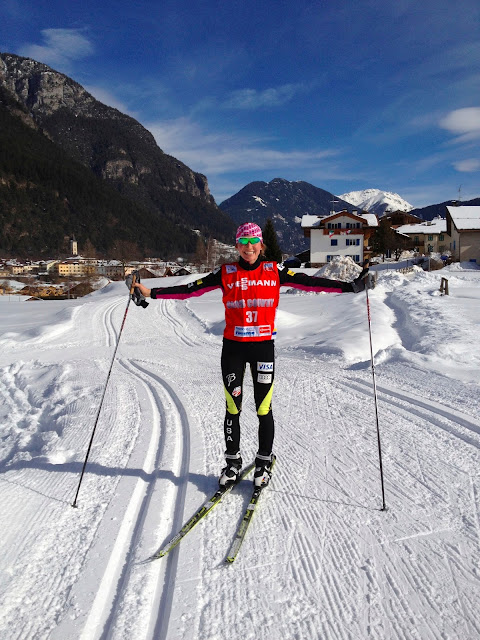 Now for the most exciting part of the week....yesterday I was able to witness Kikkan and Jessie become World Champs!!! It was AWESOME - definitely one of the most exciting days of skiing I've ever been a part of. It was so much fun being a part of the team this week and I have so much respect for everyone competing and know they're going to have a bunch more kickass results in the rest of the week. My next races are the Slavic Cups in Nove Mesto the first weekend in March and then I'll race in the World Cup Sprints in Lahti and Drammen before heading home March 14th!!

Posted by Sophie Caldwell at 9:20 AM No comments:

The Scando Cup crew had a busy week with four races in five days! Our first two races were distance races in Latvia. Wednesday was a 5k individual classic and Thursday was a mass start 10k skate. Wednesday was my first hard effort since U23s because I had been sick so I was a little nervous about how it would feel, but it ended up going quite well! These are really competitive fields that are stacked with primarily Norwegians, but also a handful of skiers from Sweden, Estonia, and Latvia. Caitlin Patterson had a great race and was 10th and I was about a second behind her in 11th! Temperatures were right around 0 degrees C with some falling snow so all the Americans ended up racing on zeroes. Reese Hanneman also had a great race, placing 24th in the men's 10k classic. The men's field was much bigger than the women's and he was only 20 seconds out of the top 10! The following day did not go as well for me, it was a really fast pace from the start and I got pretty tired but was able to recollect myself and have a strong finish. The highlights of that day were Caitlin Patterson's 9th place and Eric Packer's 16th place. Both of them were able to stick with the lead pack for the majority of the race, which was awesome to see.


As soon as the men finished their 20km mass start on Thursday, we packed up and headed to Estonia. We stayed at the Joulumae Recreation Center with all the other teams that were racing. It was very isolated and I have no idea how far away the nearest town was but it was fun to be surrounded by all the other racers and we staying right on the trails. Saturday we had a classic sprint. The women's course was very flat and the weather was right around freezing again with some falling snow so waxing was tricky. I ended up racing on zeroes again and looking back, I think klister would have been a better choice for the qualifier because while the zeroes had bombproof kick, they didn't feel very fast and you definitely wanted speedy skis on a course that was mainly double pole. I think most people had switched to some kind of zeroes for the rounds once it began to snow some more. My quarter final was very frustrating. I had an okay start but there was one girl in my heat that was extremely aggressive and cut me off multiple times. It was hard to pass out there and I finished 4th in my heat. I was pretty bummed after that day but I tried to clear my head and get excited for the next day, the skate sprint. Before moving to the skate sprint, a result definitely worth noting was Jennie Bender's 4th place qualification in the classic sprint - really impressive!

On Sunday morning, the snow started to fall around the time of the prelim. I qualified 5th and then put my legs up for awhile and waited for the heats to start. I led my quarter final heat because I knew it was hard to pass. Position was important because it was a course with a lot of turns, so you wanted to have the choice of best line. I ended up winning my quarter final but it was hard leading the whole way. In my semi, I didn't have a great start but tried to hold my own and keep best line and then I slingshotted around some people on the final turn and ended up winning! In my final, I had the same strategy as my semi and slowly moved my way up into second throughout the course and then had a sprint finish for 1-3. I ended up 2nd and it was a really fun and exciting race. It was awesome to have the US Scando squad out there cheering and since the course was only 1.1km, I felt like I could constantly here one of them cheering out there. It was nice to end the week on a high note and we quickly ate lunch and drove to Riga, where we would be flying from the following morning.


Special thanks to Bryan, Gus, and Josh for the waxing and organizing they did. Each race day we had tricky conditions and they had to work their butts off but always came through with great skis! The boys and girls had a music video competition during Scando and it took some convincing for me to participate but I was glad I did and they were both very funny. You can watch the boys' video HERE and the girls' video HERE.

On Monday I flew to Zurich from Riga and took the train from Zurich to Davos. It was quite the adventure. Traveling with a ski bag by train is not something I would recommend, but people were generally very helpful and friendly. I arrived in Davos on Monday night just in time for a delicious dinner at our hotel. So far the food is a lot more colorful, the sky is a little sunnier, and there is skiing right out the door, so no complaints here! I will be racing the classic sprint World Cup on Saturday and then heading to Italy for World Champs on Sunday! The sprint course is pretty long and hilly with some very sharp corners on both the ups and the downs. Here are a few pictures from Davos so far.

Posted by Sophie Caldwell at 2:50 PM No comments:

I ended up getting pretty sick as soon as we arrived in Latvia. I'm not sure if it was the flu or a bad cold, but even though there was no throwing up, I was not a happy camper for a few days. We're staying at an awesome little ski area in these rustic cabins that are set right on the trail. There is skiing right out our doors but we are very removed from any other kind of civilization. Being sick here was a little torturous because I looked out at the trails right in front of me every day, but wasn't able to ski or do much of anything else. David Norris had also been sick so we were quarantined in the "sick cabin". Instead of saying goodnight each evening, we'd cough back and forth at each other. While this was an exciting new language to learn, I think we were both relieved to revert back to English once we started to get healthy again. On Friday we were able to move out of isolation and back into the cabins with everyone else. I'm still hacking every once in awhile and sniffling a little but for the most part, I feel healthy. Here are some picture of the cabins and scenery.

I've been able to go for some nice skis in the past few days. The race loop is extremely hilly but yesterday I went off the big groomed trails onto some smaller flatter trails that weren't as well groomed. These seemed to go on forever and had some really fun terrain to ski on. That's my favorite kind of skiing and remind me of the skiing back home. 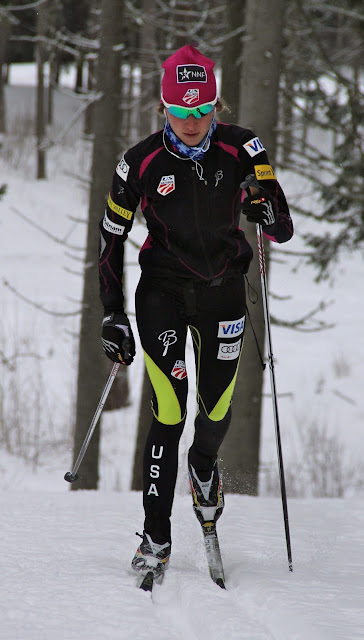 Tomorrow is the first race of the series with a 5k classic for the women and a 10k classic for the men. Thursday is a 10k skate mass start for the women and 15k mass start for the men. After the race on Thursday, we pack up and drive to Estonia where we'll be competing in a classic sprint on Saturday and a skate sprint on Sunday. They should be really competitive races on some tough courses! I'm hoping to race all the races but I'm going to see how I feel each day and only do what makes sense. I definitely want to be getting healthier and don't want to push too hard and get sick again! On Monday I fly to Davos, Switzerland and meet up with the World Champs team for some training and the World Cup in Davos before traveling to Val di Fiemme for World Champs. I'm VERY excited to (hopefully) see some sun and eat some new food!


Posted by Sophie Caldwell at 10:58 AM No comments: