On November 15th our bags were packed and we were ready to make the trek over to Europe. Leaving home always comes with a mix of the excitement of the approaching season and the anxiety of knowing we will be away from the U.S. for the next four months. It was a little easier this year because I was able to spend a lot of time at home this fall, but it's still hard saying bye to so many familiar things I love. Our first stop was in Rovanemi, Finland. Rovanemi is six kilometers from the arctic and in mid November, there tends to be very little sunlight, but with the cold temperatures and lack of sunshine, there is usually more snow than most other places in the world. We were able to adjust to the time difference, get used to skiing on snow again, and prepare ourselves for the opening World Cups in Kuusamo, Finland.
After our camp in Rovanemi, we drove a few hours to Kuusamo for the first World Cups of the season. Kuusamo is a place I've struggled with in the past. The courses are extremely hard, the competition is stacked, and sometimes it's hard to find your happy place when you haven't seen the sun in a couple weeks! It was different this year and I ended up having the best races I've had in Kuusamo with a 3rd place in the sprint qualifier and a 8th place on the day, a solid classic distance race, and a skate distance race where I was hanging on for dear life, but maybe hanging on a little better than I have in prior years. The highlight was getting to watch my friend and teammate, Sadie, climb to 2nd place in the sprint for her first sprint podium!

Lighting it up in Lillehammer

Lighting it up in Lillehammer was both literal and figurative because we traveled south and got to see a bit more sunshine and our team also had another really strong weekend. I was only racing once this weekend, so I was able to go for some longer skis on the tourist tracks and even got to ski up to Sjusjoen on my last day with Julia, Sim, and some Canadian friends. Sadie won the sprint qualifer and Jessie and I were close behind in 7th and 9th and the day got even better when we all made it through to the semis. In a close semi final, I just missed out on making the finals and ended the day in 9th, but got to watch Sadie and Jessie ski to 2nd and 5th in the final, making it another great day for the team!

Davos, Switzerland was the next stop on the circuit and it always comes with some refreshing feelings. Not only is Davos our home away from home on the World Cup circuit, but it tends to be sunny and this year it was also snowy, which makes it pretty hard to beat! We also had some of our biggest supporters and cheerleaders on the road with us for the weekend including Tiger and Kristen Shaw, Liz Arky, Bill Green, and Reese Brown. We unveiled our new wax truck and knew we had to put on a show, and that we did! We had five girls qualify in the top 13 in the sprint and two boys in the top 12. Kikkan was back on the podium, Jessie and Ida joined her in the final, and Sim and I were both in the top ten. The U.S. women were the strongest team that day, proving that we're a force to be reckoned with!

The final World Cup weekend of Period one was in Toblach, Italy and consisted of two distance races, so some of the sprinters decided to head to the Europa Cups in St. Ulrich Austria where they were holding a skate sprint, classic 5k, and skate 10k. Our crew consisted of Julia, Ida, Simi, Andy and me. The OPA is a lower level than the World Cup, but there were still quite a few big names there and it was nice to have a slightly lower key weekend and get in a bunch of races. I was psyched to take the win on a fast and furious skate sprint course and have Ida standing next to me in 3rd! The boys battled it out to the line and Simi and Andy took 1st and 2nd. The 5k classic day was right around freezing with intermittent snow squalls and our techs worked their butts off and sent us out on some great zeroes skis. I woke up feeling tired, but was happy to find some good race feelings and ski to 5th with Ida on the podium again in 3rd! The 10km skate race was a really fun race. Ida, Julia and I were all able to do some pack skiing and raced to three top tens with Simi putting down a really impressive 15km skate race. After three races in a row, we were all ready for a little Christmas break!

Heaven on Earth in Seefeld

So that brings us to Seefeld, Austria, where most of the team is based for our holiday break. I was here during Christmas last year with my family, but there wasn't any snow and I had a nasty cold, so I wasn't doing a ton of skiing. I'm missing my family this year, but have my family of teammates and copious amounts of snow. I need to pinch myself every day because it's hard to believe places this beautiful actually exist. All of the trails are open and I wish I had two weeks here to ski as much as I wanted every day, because that would be the only way possible to explore all the trails. The town is bustling with Christmas spirit, we have a lovely little apartment, and life is good. We have six more days here before heading back to Switzerland to begin the Tour de Ski. I've had a strong start to the season with more consistently good results than I've ever had in the past and I'm looking forward to period two on the World Cup. Thanks for following and happy holidays to everyone!

Posted by Sophie Caldwell at 5:54 AM 5 comments:

A Different Kind of Fall

Hello from Vermont! Most of the SMS T2 team is in the process of returning to Vermont after Park City camp, but I've pretty much been here since New Zealand. Skipping Park City camp was a hard decision to make, but after a quick turn around between New Zealand and PC camp, getting very tired at altitude last fall, and doing some tests this spring that confirmed training at high altitudes can make it very hard for me to recover, I decided to stay in Vermont this fall and try to put myself in a place where I feel well rested and confident going into the season rather than risk digging myself into a hole of tireds. I love Park City camp, seeing my U.S. Ski Team teammates, and taking an annual mini trip to the desert each fall, but this year is an important one, and I figure if there is one year to be smart about it, this is probably it. And honestly, it's been really nice! It actually only ended up being about two weeks of training without teammates, and I wouldn't want to do anymore than that, but training on my own schedule, at my own pace, with my own thoughts was pretty darn nice for a couple weeks. It didn't hurt that the weather has been pretty perfect back east and with the exception of a couple rainy days, I've still been enjoying t-shirts and sunshine.

I did sneak in a quick trip out to Colorado to visit Simi and his family and go to one of our friend's weddings. It was the perfect fix of mountain adventuring and spending time with CO friends to last me until spring. Paddy and his girlfriend Anne came and visited for a day and we hiked Paddy's first 14er (my second) and got to romp around in some early season snow.

We leave for Europe in just under a month and I'm looking forward to having most of my teammates back in Stratton. We have a couple more weeks of solid training in Vermont and then we are going to head up to Quebec to get on snow for a few days in the beginning of November. After that, we have ten days to prepare for another winter in Europe and before we know it, we'll be racing! 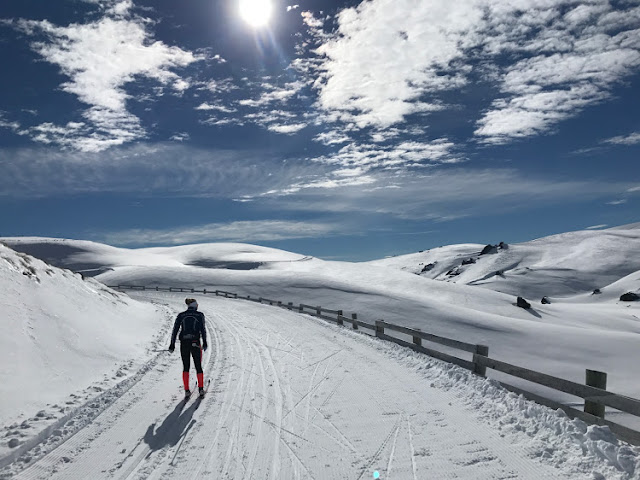 It's weird knowing that summer is pretty much over. It sounds like temperatures are dropping back home and when I get back to Vermont, it will hopefully be my favorite season - the transition from summer to fall! I was able to celebrate the end of summer in style at my cousin Lucy's wedding before flying down under. It was the first time all the Caldwell cousins had been together in years, and we had a great time tearing up the dance floor and went our separate ways with happy hearts after a weekend full of hiking, swimming, and family celebrations.


When we arrived in New Zealand, we were greeted with mid-winter conditions. After a few days of colder snow, we had our fair share of warm, slow snow, and we're currently settled somewhere in between the two where it's warm enough to wear spandex, and cold enough for the snow to stay fast. Pretty perfect if you ask me!


After a week or so up at the Snow Farm, we went down to the town of Wanaka for a few days to do some running, live in a house, and recover at sea level. I love life up at the Snow Farm, but it was nice to live in town for a couple days and switch up the routine. We went on two beautiful runs while we were down below.  The first run was along the edge of Lake Wanaka and the second followed the Matukituki river up through the different New Zealand landscapes of mountains, fields, and forests. 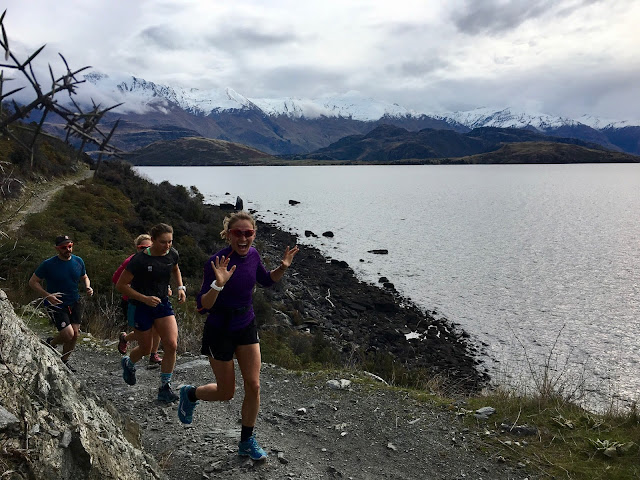 After our stint in town, we returned to the Snow Farm for another week and a half of skiing. We are mostly focusing on logging some volume on snow, but we've done a few interval sessions, speed workouts, and several of us jumped in various versions of the Merino Muster race over the weekend. The Merino Muster offers a 42km skate marathon, a 21km skate race, and a 7km skate. Jessie and Simi took the wins in the 42km races, and I was happy to cross the line in first in the 21km race. I got to ski the whole race with Caitlin Gregg (mostly following her) and had some of the most fun I've ever had in a long skate race!

We had a long ski on our schedule Sunday morning and we woke up to perfect crust conditions and couldn't help but send it into the mountains. With the help of our local guide, Nils Koons, we had a very memorable crust cruise and ventured further than I've ever gone off the trails here. After today's rest day, we have a few more easy skis and a few races before heading back home. It's been an incredible trip and I can't believe how quickly it's flown by. Thanks for following!