Ever since we got our new L.L. Bean rain jackets earlier this summer, we've been pretty lucky with the weather. I don't know if the two events are at all related, but New Zealand was beautiful, Norway rained the first day and then cleared up, Lake Placid was the nicest weather we've ever seen, and the past week in Vermont has been perfect. According to the forecast for this coming week, we're finally going to have to use those jackets, but for the time being, I can't complain.
People often ask me what my favorite time of year is and I've decided that this is it. I suppose it's officially fall now, but the transition season of late September and early October in Vermont is hard to beat. The temperatures have fallen, the leaves are changing, there are fresh apples and cider doughnuts in every store, and I get to be home.

We have most of the T2 team around the Stratton area and have been focusing on recovering from Lake Placid camp and getting in some solid training before heading out west for the majority of October. Jason Cork was here helping out for the last week, so between Coach Pat and Jason, our workouts have been really well supported. SMS is in full swing and we've done some workouts with the high school kids. It's a big, speedy, young group that everyone should be looking out for this winter!


In other exciting news, our annual SMS Skiathon is happening tomorrow. Be sure to look for updates and visit our website if you would like to make a donation. Happy Fall!

Posted by Sophie Caldwell at 7:01 PM No comments:

Lake Placid camp was a little different this year. Instead of our normal two week camp, we condensed the camp into one week. One really hard week. The first day of camp we did intervals in the morning followed by intervals in the afternoon. Two more intensity days, some speeds, strength, and a lot of easy distance later, the week was over. I loved the new format of camp. The Olympic Training Center is an ideal place to train and recover, but I also haven't spent very much time at home in Vermont, so I was happy to make the camp a little shorter and allow for some more time spent at home. I don't feel that we lost any quality by making it a shorter camp because we condensed a lot of what usually do in the two weeks into one week.


The USST showing at the camp was pretty small, but the number of younger athletes who joined us made up for it. The campers consisted mainly of the SMS T2 team, the Sun Valley Gold team, and a big group of younger NTG athletes from all over the country. I think it's particularly fun to have a bigger group of younger athletes because it wasn't too long ago that I was one of them. This is probably one of the first camps where I've been one of the older athletes. I got to room with my USST and SMS teammate Julia Kern, and when she told me how she had the pre camp excitement jitters, it put a smile on my face and reminded me just how lucky we are to be able to be doing this. I don't get nervous, or even super excited for camps anymore, but I remember when the idea of a camp where I could reunite with all my friends AND train with Kikkan Randall and Liz Stephen made me feel exactly that same way. Now they're my teammates, as well as my dear friends, and I hope that the younger girls at Lake Placid camp can now confidently add our names to their list of new friends.


We skated, classic skied, bounded, ran, did strength, mountain biked, and double poled. I think we covered it all and no one was the strongest athlete every single day. We worked together to push and pull each other through a hard week. I personally had a handful of good days and a couple workouts that I had to physically and mentally push through. Although we didn't do the Climb to the Castle this year, we still did the annual Whiteface bounding intervals which are one of the toughest workouts of the year for me. That may have been a workout where my goal was to survive, but there were other workouts where my goal was to thrive and each person came in with different strengths and goals for the new day. I learned a lot from following others and hope that everyone else made some gains from following me. After the classic sprint qualifier, Jessie took me down the scary downhill three times to show me how to ski it safely without losing time. She could have kept her amazing downhill skills to herself and dusted us all on the downhill, but instead she shared her knowledge to help make everyone better. That's just one example of good teamwork that stands out from the past week, but I think there were a lot of success stories of working together and everyone came out of the camp a better skier.


The camp wrapped up with my favorite workout of the week...a run in the Adirondacks! We ran up Algonquin and then to Avalanche Lake. We started the morning in a bit of a fog, but halfway through the run the skies cleared and we had some beautiful views. Today marks the first day of fall and that was visible in the changing foliage. After the run yesterday morning, we packed up and headed back to Vermont for a couple more weeks before heading out west for most of October. Thanks to Lake Placid, my coaches, Matt and Pat (and all the other coaches at camp), and all the athletes who made it such a good week!


Posted by Sophie Caldwell at 4:45 PM No comments:

After two big weeks of training and four races in Norway, it was time for a recovery week. Simi and I flew to Colorado for a week of recovering and spending time with his family. Recovering at altitude isn't the easiest thing for me. Sometimes standing up can put me into level 1, so I tried to be very careful to keep our adventures easy and not tire myself out too much by trying to keep up with Simi and the rest of the family. We spent the first four days in Aspen and did some mountain runs, climbing, and a roller ski down in Carbondale. Simi's sister Jenny and her fiancee, James, just got a new kitten who we spent a lot of time babysitting and playing with - the perfect kind of recovery!

After a few days in Aspen, we headed down to southern Colorado to spend some time at Sim's family's ranch. I hadn't been back since last summer and I think it's one of my favorite places to be. It's somehow the most relaxing and activity filled place in the world. By early afternoon on the first day we had paddle boarded, played volleyball, mountain biked, eaten lunch, and dropped some tennis rackets off to play tennis for when we returned from the climbing adventure we were about to embark on. On the first climb, Jenny took a nasty fall and really messed up her ankle. Not only was it the worst injury I've ever witnessed, but it was also the most pain I've ever seen anyone in. We took her to the hospital in Del Norte where she was airlifted to Denver for surgery. I don't know of anyone else who could have gone through that much pain without fainting, but she's the toughest cookie I know!


Our buddy and former Norwegian World Cup star, Celine Brun-Lie, joined us for the weekend at the ranch. She is going to the Colorado School of Mines in Golden and had just finished up her first week of classes! She came out of retirement for the weekend and was quite the trooper participating in every single activity we did. Our last morning at the ranch we went for a big hike up into the zone that a wildfire had burned down a few years ago. It's a very different kind of beautiful to see a forest that had been destroyed mixed with the regrowth of all the wildflowers and baby Aspen trees. 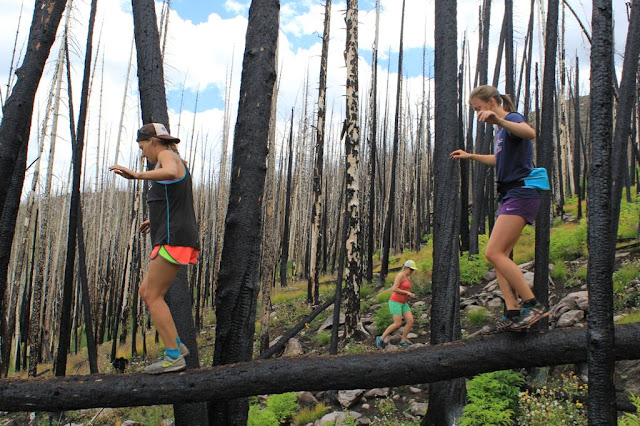 After heading home from the ranch, we drove to the hospital in Denver to visit and spend some time with Jen before heading back east. She's doing a little better each day and we're sending her a lot of love and speedy recovery vibes. I flew back home to Vermont on Tuesday and arrived at my parents' house to the rest of my SMS T2 team and a delicious team dinner. September training is kicking back up and it's nice to have the group back together after a busy summer of traveling. I'm looking forward to being in one place for the majority of September and getting into a nice training routine back home. We have a bunch of visitors coming to train with us this month and a one week camp in Lake Placid in the middle of the month. We also have a team fundraiser pizza dinner on the 8th at the J.J. Hapgood General Store in Peru. So if you're in the area, you should stop on by for some tasty pizzas and live music!