We're currently in Bend, Oregon for our startup camp with the US Ski Team. We had a rainy day or two at home before leaving, so that made it easy to look forward to the blue skies and sunshine that Bend has had almost every day. Before leaving home, Andy, Simi, Erika, and I got some good training in with Pat and Gus and we were able to do some drills with the SMS kids which is always great because they keep us on our toes!

Andy, Erika, and I also stopped by the Flood Brook Union School to help them build their new playground. It was an awesome event with tons of volunteers who showed up and I think we're all looking forward to playing on the playground this summer.


The Saturday before I left, I woke up to a beautiful sunny day and drove down to Brattleboro where one of the VT Girls on the Run 5ks was taking place. The girls I work with from Flood Brook are doing their run in Rutland on the 31st, but I'll still be out west and was asked to be a speaker before the run in Brattleboro. There was a huge turnout of about 750 girls who completed the 5k! It was a truly inspiring experience and I'm so happy to have been able to be a part of Girls on the Run the past two years. 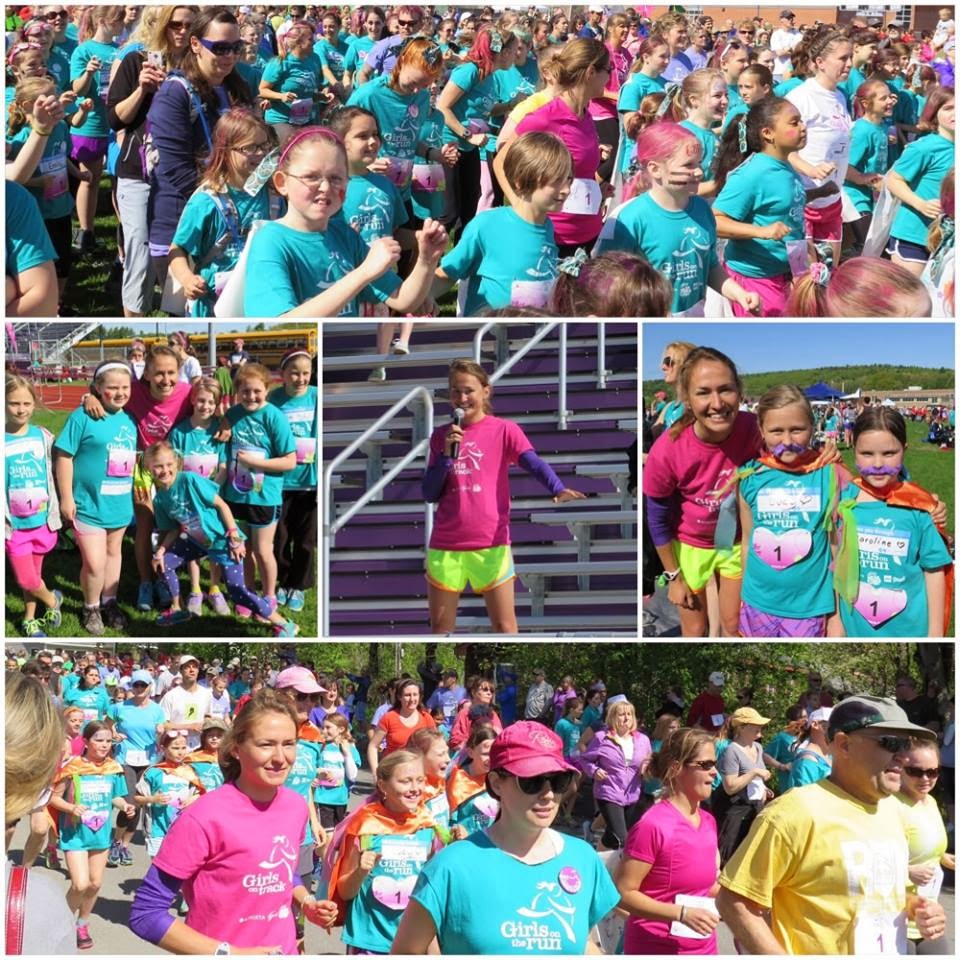 After some frantic last minute packing, we flew across the country on Monday to Bend, Oregon. There is more snow here than there was last year and the weather has been beautiful. It's so much fun to be reunited with the team after a month or two of doing our own thing for the spring. Skiing was feeling really good, but unfortunately I toppled over on my mtn bike the other afternoon and fractured my elbow and sprained some ligaments. I really wish it was a cooler story, but I wasn't doing anything impressive, I just didn't unclip in time and toppled over onto a straight arm. I'm hoping to see an elbow specialist in the next couple days to find out exactly what I can and can't do, but in the meantime I've been taking it easy and going for some nice walks. The hardest part right now is that it's my right arm, so everyday things such as getting dressed, eating, and typing take about three times as long as they should. As frustrating as it is to not be able to ski, I'm lucky to be in a beautiful place with my supportive teammates who make everything better.


Erik is also suffering from an injury, so yesterday Matt took the injured kids on a field trip to Tumalo Falls. It was good to get outside and walk around and the falls were beautiful! We climbed down behind the waterfall and got drenched in the freezing water. Here are some photos from our adventure.


I'm not sure what my plans will look like, but I'm hoping to be able to start doing some skiing without poles this week and as of right now, I plan on staying in Bend and going to Park City for a week after this camp. I think it will probably be about a month before I can start to use my elbow again, but I'll be working on some strong legs!
Posted by Sophie Caldwell at 1:26 PM 1 comment:

April flew by and it was the perfect combination of being at home, seeing my friends and family, and spending a little time in the sunshine. April is a funny month for skiers because the rest of the year we are constantly training, traveling, and racing, and then suddenly our only order is to rest for a month. We still stay active, but I personally don't really follow a training plan for April. If I feel like going for a run, I'll go for a run, but if every once in a while there is a rainy day where I find myself still in my PJs at 4pm, that's also just fine. I enjoy having that freedom and lack of structure for a month because it gives me time to recharge and by the time May rolls around, I'm ready to jump back into training. By the end of April, it's tough to know where you're going to be in terms of fitness after not doing much training for a month. I trust that rest is what I need at that time of year and know that it's easy to overdo it in April, so I usually lean towards doing too little rather than doing too much. Usually the week that includes May 1st is the first official week of the training year, but I started a week later this year because I had a vacation planned with some of my best girlfriends that involved, well, a lot of relaxing. So this week has been my first week of training and even though just about every part of me has been sore all week, it feels good to get back into it. We started the week with a bang with our 2 mile uphill run test. A lot of us set PRs or were close to our PRs and that was really encouraging because it meant that even after a month of resting, we didn't lose too much fitness and we are clearly well rested and ready to go! Before Tuesday, the last time I had done strength was at the end of February, so I was pretty sore the past couple days. I woke up feeling better this morning, just in time to go to the gym again this afternoon.

Erika and I have been helping coach at Girls on the Run on Mondays and Wednesdays. We help out at the Flood Brook Union School where I went to school from K-8th grade and these afternoons are honestly some of the highlights of my weeks. The girls are in 3rd-6th grade and after a healthy snack and a little pep talk, we just go out and run. Our girls ran 5 kilometers on both Monday and Wednesday this week and I'm so proud of them. They are training for their 5k race at the end of the month. It's an awesome organization and I would encourage any girl to get involved with their local program.

We've had some big news as far as our SMS T2 team goes. Gus will be leaving our program, but Patrick O'brien will be taking over as our head coach! I'm sad to see Gus go, but it's been great having him around for the spring and we're all really excited to have Patrick joining the group. HERE is the fasterskier article on Patrick. Eric Packer has also decided to stay in Alaska and ski for APU. He will be missed dearly, but we're all very happy for him and looking forward to watching him next year. Our new additions to the team are Ben Saxton, who was with us last year as a PG, and Annie Hart who has trained with us a bunch over the past couple years. They are both easy fits and great people and we're psyched to welcome them to the team! Jessie, Simi, Andy, and I will be heading to Bend Camp on May 19th and the rest of the team is either already here or arriving in the next month. By the time we get back from Bend, we'll be reunited in Stratton and I'm looking forward to an awesome summer of training. HERE is an interview I did with FIS about last season and getting ready for next season. That's all for now!

Posted by Sophie Caldwell at 3:03 PM No comments: